We have our factory, which is called a stage. We make a product, we color it, we title it and we ship it out in cans. – Cary Grant

I have loved movies for as long as I can remember. My father died when I was 9 and I remember obsessively watching and re-watching the films in the awe-inspiring collection he had built up on VHS. Humphrey Bogart, Marilyn Monroe, Gene Kelly, the Marx Brothers and most especially Cary Grant became my screen heroes. And once I had exhausted that stash of films I found the magic of late night BBC2 and Channel 4 film screenings full of weird and wonderful glimpses of the world: Videodrome, Sebastian, Zero Patience, Glen or Glenda, the Silence, Manhattan, Parting Glances, To Die For (both, yes both, versions).

I came to University in 1999 and joined, became Secretary, and then became Vice President of the Edinburgh University Film Society, later I became part of the committee of the British Federation of Film Societies Scotland. I came to study engineering but I ate, drank, breathed, sleept celluloid. New wonders awaited: A Clockwork Orange, Badlands, Bound, Ashoka, Suspiria, Hana-Bi. In my final year of University I managed to find a way to take the Introduction to European Cinema module (usually reserved for French students) and discovered L’Atalente, The Phantom Carriage, Wild Strawberries… I became a trained 35mm projectionist to help show Bollywood films. I stood not 10 feet from Shah Rukh Khan.

In 2000 I began reviewing films at the Edinburgh International Film Festival and on DVD for InsideOut Film (now split into IOFilm and EyeForFilm), for IFDNRG, for BFFS Scotland, for Fest and discovered even more wonders: 101 Rejkjavik, La Ronde, Ringu, The Adventures of Prince Achmed, 8 Women, Les Chansons d’Amour, The Black Balloon, Young Adam, Intolerance, Les Parapluies de Cherbourg, Let the Right One In. I interviewed directors. I saw films before release. I saw films that would never be released. I saw a third of the films at my first EIFF in 2000. I was absolutely spoilt for life.

I still watch films whenever I can. I still haunt EIFF though now with my partner and as an actual paying punter but we still see a lot of films every year. I will make special trips for a rare screening. I will even go to a multiplex without masking and with barely a projectionist in the building if the film is rare enough. In recent months I have adored the experience of seeing a special screening of John Waters’ Polyester in truly glorious Smellivision, three packed screenings of the Quaatsi Trilogy with live accompaniment from Philip Glass and his ensemble; and even a bog standard (3D) multiplex screening of the trashily awesome Ra.One.

My all time favourite films include An American in Paris and Manhattan, both of which I consider utterly perfect, as well as North By Northwest and Radio Days. Merry Christmas Mr Lawrence and Sunshine are the two films that have made me cry more than any other, the latter is a masterpiece of small-scale British drama. My favourite screens in Edinburgh are Screen One at the Cameo, Screen One at the Filmhouse, George Square Theatre (for nostalgic reasons) and the now long-closed Screen One at the Odeon on South Clerk Street. And yes, of course I have specific seat preferences in each of these places. I make my own popcorn and my preferred blend is 50% sea salt to 50% caramel. In my fantasies I watch all films alone in a gloriously large empty theatre on 35mm with properly placed marking and a steady supply of coffee…

Here then is my archive of reviews and writing on film:

Reviews
I was also producing my own podcast Suchprettyeyes On Film for a while – if you can recommend a good value and properly long-term personal podcast hosting solution I will resurrect it but in the meantime email me for a copy of the MP3s if you’re interested.

My Cabaret of Dangerous Ideas show for the Edinburgh Fringe, “Is Your Online Reputation Hurting You?“, is on 11th August 2017 – BOOK NOW! 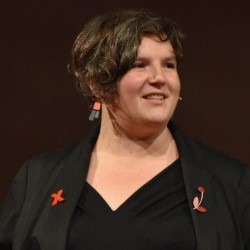